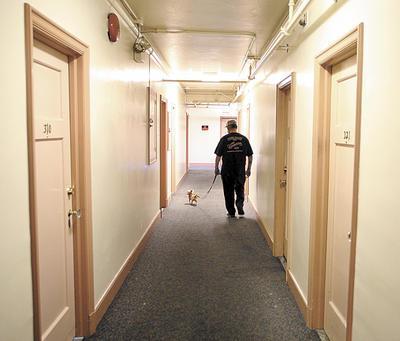 A program to house 180 of the most medically vulnerable, chronically homeless people in Santa Cruz County has kicked off with its first 10 participants.

Based on a national push to provide stable housing for the homeless and then address obstacles to employment, 180/180 leaders plan to provide housing for 180 people by July 2014 and turn their lives around 180 degrees.

Phil Kramer, the 180/180 project manager, said residents have a moral obligation to reduce the number of homeless people who die on the streets of Santa Cruz County each year.

Since May, volunteers involved with the 180/180 campaign have interviewed about 400 homeless and determined 190 of them to be medically vulnerable.

One man, among the first 10 to be housed, had been in emergency rooms eight times in the past eight months.

"We have to start one by one," Kramer said Monday. "It really starts with stable housing."

Another driver of 180/180 in Santa Cruz County has been recent studies across the nation that show providing permanent housing for the homeless is more cost effective than providing ambulance rides, emergency room visits, law enforcement and other emergency services.

Studies that have included Los Angeles County suggest that providing "housing first" is a more efficient use of public money.

Leaders from each of the agencies have met weekly at the Homeless Services Agency and strategized ways to find housing.

Eight men and two women were among the first 10 participants. Their average age was 57, and they had been homeless for six years on average.

Three of the first 10 participants were military veterans. Their rent is now paid by the federal Veteran Assisted Supportive Housing program. They have been assigned a case worker, who can help them find jobs and connect them with mental health and drug and alcohol intervention, if they need it.

Monica Martinez, executive director of the Homeless Services Center, said she was encouraged by the recent collaboration.

"It's great to see so many people and organizations get involved," Martinez said. "It's exciting to see these first people housed, but we still have a ways to go."

Rather than try to house people in one big apartment complex, they have started to spread participants in apartments and residential hotels across the county.

The apartments are at places like Barson Street in Santa Cruz and the Resetar Residential Hotel in Watsonville -- where leaders are trying to place men and women in some of its 80 studios. With a studio's typical monthly rent of $445, the Resetar provided affordable housing already. It was built in 1927 and is now owned by Milpitas-based nonprofit Housing for Independent People Inc.

Carissa Flores, property administrator of the Resetar, said she hoped the hotel could be one of the 180/180 sites. However, it already has a wait list.

"We're trying to brainstorm with them, because we do have an affordable housing shortage" in the county, Flores said.

Leaders of 180/180 said they have started to compile some of the most detailed information yet on the homeless in Santa Cruz County. They planned to track the participants' progress.

They are looking for volunteers and donations for the project. More information is at www.180santacruz.org.

"It can take a long time to move from homeless to stably housed," Kramer said.

"The legacy will be in the lives that have changed."

WHAT: The 180/180 Campaign aims to house 180 of the most medically vulnerable, chronically homeless people in the county by July 2014 and turn their lives around 180 degrees.
WHY: To reduce the number of homeless deaths in the county, which topped 23 in the past three years.
WHERE: One-bedroom apartments, studio apartments and residential hotels across Santa Cruz County.
HOW: By using existing funding and programs from city, county and nonprofit agencies, it aims to provide housing first and then work on problems such as job placement, mental health and drug and alcohol abuse.
WHO: The campaign is a collaboration of the city of Santa Cruz's Homeless Services Center, the county's Homeless Persons Health Project and the nonprofit Santa Cruz Community Counseling Center, Santa Cruz AIDS project, and the behavioral health agency Front St. Inc.
INFORMATION: www.180santacruz.org