A Home for Former Foster Youth 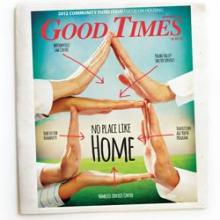 Create a sea of change. Begin by learning more about five local nonprofits in our annual Community Fund issue.

Sometimes the best gifts come unwrapped. No curly ribbons or bows. No frills. Often, these gifts come in the form of generosity and kindness—from family and loved ones, or from people we hardly know at all. All of this factors into the mix of our annual Community Fund issue, in which we shine the spotlight on the very important and vital issue of housing.

Look around: Many of us either have close friends or family who have experienced a housing issue, or, we know of people who have been thrust into such challenges. Whether it’s the young adult aging out of foster care or others we know that have been forced onto the streets, housing remains a serious issue in this county. To that end, take note of the five organizations featured on the following pages: Transition Age Youth Program, Habitat for Humanity, Watsonville Law Center, Homeless Services Center, and Pajaro Valley Services Center. The dynamics of these local nonprofits may surprise you, but here’s where you come in: Learn how your own contributions to the Community Fund are more vital now than ever before. One-hundred percent of your contribution goes to the nonprofit of your choice. In addition, the David & Lucile Packard Foundation and Santa Cruz County Bank will match those funds. And be sure to read an additional feature this year, which spotlights the 30th anniversary of the Community Foundation at the bottom. In the meantime, consider giving the gift of making a difference. | Greg Archer, Editor

In addition to an Independent Living Resource Center which is open two days a week, the Transition Age Youth Program offers numerous services, including counseling, skill building and subsidized supportive housing, to current and former foster and probation placement youth, ages 15 to 24.

Whitney Williams, Aaron Ramirez and Greg Hagio all have vastly different personal histories, but regardless of what they’ve been through, all three former foster children were given a new lease on life at the Transition Age Youth (TAY) Program.

The program, which was established in 2001 under the umbrella of the Santa Cruz Community Counseling Center, was created in order to help curb what TAY Program Manager Susan Paradise describes as “an epidemic” in the number of young people who leave the foster care system without a place to live, and without basic independent living skills.

Part of the reason for that epidemic is that in California, when a foster child turns 18, they “age out” or emancipate from the foster care system, and no longer receive state benefits. Each year in the U.S., approximately 20,000 of the more than 500,000 youth in foster care “age out.” Often, those youth end up living on the street, without job training or guidance.

“There are so many things that you take for granted that you would know just by growing up in a family,” says Paradise. “Like ‘How do I open a bank account?’ ‘How do I pay a utility bill?’ ‘How do I use heat in a building?’ There are a million things like that, and when you have no one to ask, it’s debilitating.”

That’s where TAY comes in.

In addition to an Independent Living Resource Center which is open two days a week, the TAY Program offers numerous services, including counseling, skill building and subsidized supportive housing, to current and former foster and probation placement youth, ages 15 to 24.

The Independent Living Program (ILP) teaches youth independent living skills and helps them to achieve educational and vocational goals in order to transition to self-sufficiency. ILP services include counseling, assistance with obtaining ID cards, driving permits and licenses, and workshops at Cabrillo College on topics such as money management and health.

For 21-year-old Whitney Williams, those workshops were a godsend.

“This program provides a foundation for kids who don’t have the option to live at home until they’re 24,” says Williams. “No 18-year-old should have to worry about things like housing.”

Not only did Williams find housing and work through the TAY Program, but she also says she learned about the importance of integrity and a good work ethic. “I learned about priorities and how I have to put my stability first,” she says.

Not all former foster youth are as lucky as Williams, however.

In 2010, the TAY Program received federal stimulus money for Homeless Prevention and Rapid Rehousing (HPRR), and was able to use those funds to provide short- and medium-term financial assistance, housing relocation, and stabilization services to address the immediate need of housing for 39 youth over a two-year period. A full-time case manager was dedicated to the program, and youth received anywhere from $500 for rent, to $950 per month for 18 months to cover their rent while they stabilized, finished their education and found employment.

But while the HPRR program was a success, the stimulus funding ended this year. And as a result, more youth are struggling to find and maintain stable housing.

All together, the TAY Program has 23 housing slots. Eight of them are transitional Section 8 vouchers—18-month vouchers that require youth to pay 30 percent of their income as rent—and the other 15 fall under the state-funded, 24-month Transitional Housing Plus program. THP Plus participants receive assistance securing and paying for independent housing and meet regularly with coordinators to work on independent living goals.

Greg Hagio, 19, was a recipient of one of those Section 8 vouchers. A member of the TAY Program since age 16, Hagio says he feels forever indebted to the TAY Program for helping him to find his first and second job, obtain housing, and pay rent for four months.

“It’s helped me out tremendously—I just can’t believe it,” says Hagio, who was placed in a group home after being put on probation. “I started going to meetings to learn about living on my own, paying bills, and finding places to live and work. I’ve matured a lot, and I’ve been living on my own ever since.”

With a limited number of vouchers to disperse, there are currently 30 youth on the TAY Program’s waitlist for housing. While they wait for slots to open, they are either couch surfing, staying with their biological family, or living on the street.

“If you’re afraid or don’t know where you’re sleeping at night, it’s really hard to go on a job interview—where is a person going to call you back?” says Paradise. “All these other things that could help you get out of homelessness, they’re really hard to pursue when you don’t have a home.”

In Aaron Ramirez’s eyes, he had it easy.

“I was homeless for about a week,” recalls the 23-year-old. “I chose to leave my former foster care because my pitbull couldn’t stay there. So my dog and I lived in my two-seater car.”

In dire need of a place to stay, Ramirez reached out to his biological father, whom he ended up living with for a year and a half. When the living situation no longer worked out, Ramirez moved in with his sister, who was living with a former foster parent.

“When I moved in with my sister I was really worried about how I was going to make ends meet,” he says. “But I got involved with the [TAY] Program and didn’t have to worry as much. I have a little bit of a cushion now, until I get a savings account going. I’ve been trying to save up for the future.”

After three years of attending workshops with the TAY Program, Ramirez believes it’s his mission to spread the word about the good work that they do.

“A lot of former foster youth turn to crime when they don’t know about this program,” he says. “By advocating for this program I can be a voice for them.” | Jenna Brogan

Read the full article at: http://www.gtweekly.com/index.php/good-times-cover-stories/4357-communit...