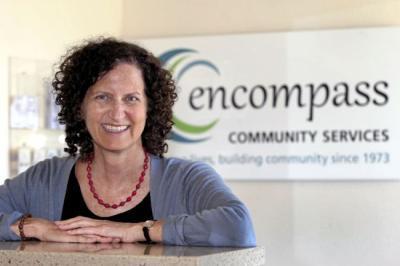 Coleman, who has served as executive director since 2007, turned the reigns over to Monica Martinez, who led the Homeless Services Center before being appointed to fill Coleman's role in April. Encompass, which until last year was named Santa Cruz Community Counseling Center, has a $24 million budget and about three dozen programs ranging from Head Start, parenting groups, mental health and substance abuse recovery, and supportive housing.

Coleman, 62, has been a very public champion of community support for — and local government funding of — social services provided by 375 full-time employees working in 32 locations around Santa Cruz County. She has been a leader within the Human Care Alliance that advocates on behalf of many nonprofits and served last year on the city's public safety task force assembled amid an uptick in violence and discarded drug needles.

"The counseling center has been one of the main social service providers for a long time, but after Carolyn came into a leadership position, their profile in the community has really risen," said Vice Mayor Don Lane. "Part of it is how committed Carolyn was to being wherever she could be. That has really changed how people perceive Encompass."

"From my perspective, she always helped me see the issues we were considering from a different point of view than my own," said Kris Reyes, who chaired the public safety task force.

Of her visibility, Coleman said, "I think of myself as a real connector." But she credits her staff for really making a name for Encompass.

"Our people are just out there every day, doing such excellent work and with such dedication and commitment," she said. "In this kind of work, it is about who is delivering the services and what kind of care they have for people who are vulnerable and in need."

Coleman said now is the right time to enjoy more time with husband Curt Coleman, a retired educator, and their two children. The couple met in Boston and have been together 40 years.

Coleman, an English and education major in college, became interested in social services after working for Head Start in Connecticut in 1965. She joined the Santa Cruz agency in 1981 as an administrative assistant working in youth services and eventually was promoted to the top finance job, having earned a master's degree in business administration.

As executive director, she saw the agency through the Great Recession, which increased the organization's client base and waiting lists even as some funding streams were dwindling. However, Coleman said, community donations to the organization actually increased during the lean years, and Encompass was able to take on other groups, such as the Santa Cruz AIDS Project and in coming months, the Gemma program serving women who have been incarcerated.

"What I admire most," Martinez said, "is the way she has been such a great steward of the organization."

Who: Retired executive director of Encompass Community Services, where she worked 33 years.