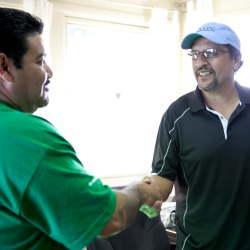 This month marks the 40th anniversary of the center, which offers an umbrella of services that range from housing assistance to behavioral health counseling, parental education and nutrition classes, among others.

Back in 1991, Luna entered the organization’s residential recovery program after receiving a felony drunken-driving conviction. At the time, he says, he just wanted to avoid prison time. But his experience at Si Se Puede proved more transformative than he could have imagined.

“I ended up working on myself and my issues,” he says. “I realized I was going to end up killing myself.”

He’s been sober ever since, is happily married and owns a home. He began working as a counselor at Si Se Puede in 1993, a job he says helps him just as much as it helps the people he works with.

“It’s a beautiful experience,” he says. “I really enjoy what I do.”

Luna is one of about 375 people employed by the counseling center, which serves approximately 7,500 people annually.

“One thing that we always say is that we’re kind of the best-kept secret in Santa Cruz County,” says Executive Director Carolyn Coleman. “We’re hoping to make people more aware of the wide spectrum of services offered,”

Coleman first started working at the organization in 1981 as a program assistant in the youth services program, and has worn a variety of hats since then, becoming executive director in 2007. First founded in 1973 with a focus on substance abuse, the center has grown and expanded in the past four decades against a backdrop of economic recessions, the AIDS crisis, the War on Drugs and much more.

“One reason we’ve been successful is that we have been able to be flexible when it comes to changing community needs,” Coleman says,

The recent economic downturn, which coincided with Coleman becoming executive director, has had a huge effect on the counseling center and on the needs of the community.

As more people find themselves out of jobs, the organization also suffered a 5.2 percent cut in federal funding, and officials have had to make some hard choices.

To combat these dueling elements, organization employees have strived to make cutbacks where they can without leaving clients in the lurch. That has meant such moves as letting go of some of their transportation services and having staff take furloughs—anything, basically, that can be done to maintain services without affecting families and children, they say.

At the same time, there’s been an increased need for the organization’s behavioral health services—a term that encompasses both mental health and substance abuse services; the two often go hand-in-hand, Coleman says.

“I think people really understand the need for drug treatment,” she says.

Those services have also become more

in demand as the state’s prison realignment

program is implemented, shifting more people out of the County Jail and into custody

alternatives that often include drug and alcohol treatment programs.

At the center’s core is an emphasis on what officials there call participatory decision-making.

“We are not the solution, we are just a catalyst,” explains Deutron Kebebew, project director of PAPAS, a program that focuses on fathers.

PAPAS runs classes supporting fatherhood involvement, as well as courses in conflict management, and works to raise awareness of the impacts of positive fatherhood as opposed to absentee fatherhood. It works with fathers being released from jails and prisons on re-entering into and re-integrating with society and their families as well.

The absence of fathers is a huge social problem, says Kebebew, and programs like PAPAS benefit society overall as a result.

The economic crisis has increased the need for PAPAS services, Kebebew says.

“We’re seeing more dads coming in—when they aren’t employed, their self-esteem goes down, they get depressed, they feel helpless,” he explains. “We’re seeing the distress it has on families.”

He’s also seen the overall need for mental health services increase in recent years. Still, he is positive about the future and says the fact that he sees more fathers seeking services is ultimately a good thing.

“We have a new generation that is really engaged in their role as fathers,” he says.