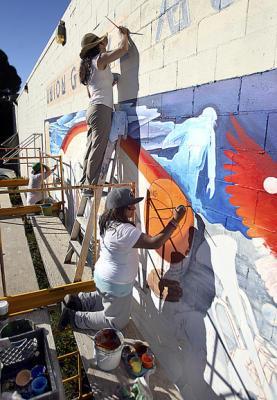 SANTA CRUZ -- A vibrant rainbow and soaring eagles will once again grace the side of the Union Grove Music building at Pacific Avenue and Elm Street.

Yermo Aranda, who originally painted the mural in 1995, is leading the restoration. He expects it will take three weeks. Gaskins' widow, Michele Baime, secured a grant from the Arts Council of Santa Cruz County to cover part of the restoration cost.

Gaskins was a drug and alcohol counselor at Youth Services and worked with many students at the Youth Experiencing Success School in Santa Cruz.

"He was instrumental in turning a number of students' lives around," said Michael Watkins, county superintendent of schools, who worked with Gaskins when he was the director of the alternative education program.

Two current Youth Experiencing Success students, Gloria Caruso and Zach Winer, are repainting the mural alongside Aranda. "I'm helping with this mural because the Y.E.S. School has helped me so much in my life," Caruso said.

Gaskins' memory lives on at the school. "We still celebrate him," Winer said, adding that he was honored at a barbecue last year. "It's really fulfilling to be able to immortalize King this way."

"He was loved by everybody," Baime said of her late husband. "He was just magnanimous. Kind of an angel."

On the mural, Gaskins is depicted with his famously wide smile, embracing a group of teens with one arm while tossing a basketball with the other. He grew up in the Mission Hill housing project in Boston and was a star basketball player in high school.

He played street basketball in the Santa Cruz area, Baime said, including Jade Street Park in Capitola, where there is a memorial bench to Gaskins near the basketball courts.

To restore the faded mural to its former splendor, Aranda is using more durable paint and adding a protective sealant. The paint is supposed to last 80 to 100 years, Aranda said, but 30 to 40 years is probably more realistic.

Ralph D'Oliveira, a graphic artist who also painted the original mural, will repaint the lettering on its sides. This includes two poems by a co-worker and a student of Gaskins. The latter is titled "The King of Y.E.S." D'Oliveira will add more testimonials from former students.

Baime is seeking additional testimonials for the mural, as well as donations, on the KingofYES Facebook page.

Members of the community are invited to join the repainting from 11 a.m. to 3 p.m. Sunday and Monday.

Baime is planning a re-dedication in June, close to the anniversary of Gaskins' death.

She reflected on the mural's progress. "I want to cry, but I'm smiling, because it's coming back to life," Baime said. "I'm really excited."

WHAT: Join the repainting of the Gaskins mural
WHEN: 11 a.m. to 3 p.m. Sunday and Monday
WHERE: 1003 Pacific Ave.
INFORMATION: Visit https://www.facebook.com/KingofYES or email [email protected]