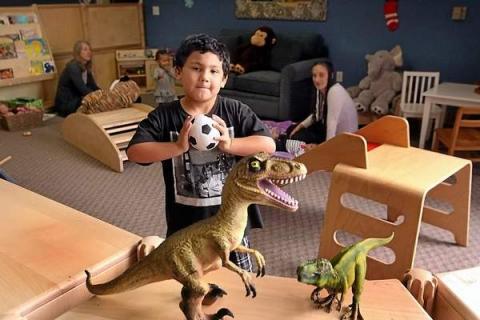 SANTA CRUZ >> Carving out a slab of space devoted to the impulses to learn and grow of homeless children was a no-brainer at the Homeless Services Center’s Rebele Family Shelter.

It just took officials a while to get there.

In recent weeks, though, the shelter pushed aside other difficulties, using funding and support of Encompass Community Services’ Head Start program to convert half its dining area into a safe no-pressure place for children to “just be,” said Rebele Family Shelter Program Manager Mary Triulzi.

“Up to this point we had no common area with a place where children could really be without having to constantly be inhibited. That’s the chronic state, certainly for folks who are homeless, but underserved populations don’t have a safe space for children to play,” Triulzi said Thursday. “Children are wired to grow and develop, so it puts the parent of the position of ‘no, don’t.’ All those healthy impulses you have are ‘no, stop, don’t.’ That’s the most important piece. That this is a ‘yes.’”

Toy furniture, books, soft blankets and other toys lined the fenced-in area on Thursday. It is available for the 27 otherwise homeless families who currently call the shelter home. Each family has anywhere from one to five children, Triulzi said.

“The space will provide a quiet safe retreat for young children in the usually hectic environment of the shelter,” Sloane said.

While the play space is primarily designed for children up to 7 years old, older kids may use the space with permission from shelter staff, said Triulzi.
“Last night, we had an 11-year-old, a 9-year-old. They came in, the put the boat up on the side, they took the kitchen, and they made a fort. And they called it a bomb shelter. This is a chronically homeless family,” Triulzi said. “Their play is very serious. It is development. It is good work that they’re doing to figure out how to defend themselves from all that they have to face in the world.”

On Thursday morning, Holly Martin brought her 1-year-old Patience and 2-month-old Passion to the new play area. Patience, up on her feet and walking around the enclose area, was deeply engrossed in mimicking ladling food out of a tiny empty pot with a spatula.

“I like it. She can play,” Martin said, pointing to Patience. “She didn’t really have a place to play before. Here she can run around.”

Homeless Services Center spokeswoman Valerie Thomas said the new play area will be a valuable addition to the campus.

“You can do parenting skills and all that. So it gives a much better space than just sitting in an office with the kids going, ‘I’m bored,’” said Thomas. “Every time I’m in here in the evening, I see the kids in it.”